Europe is now the top buyer of U.S. liquefied natural gas after a near fivefold spike in U.S. LNG sales to the continent this winter, overtaking South Korea and Mexico, a Reuters analysis has showen. Profit rather than politics is driving the increase. 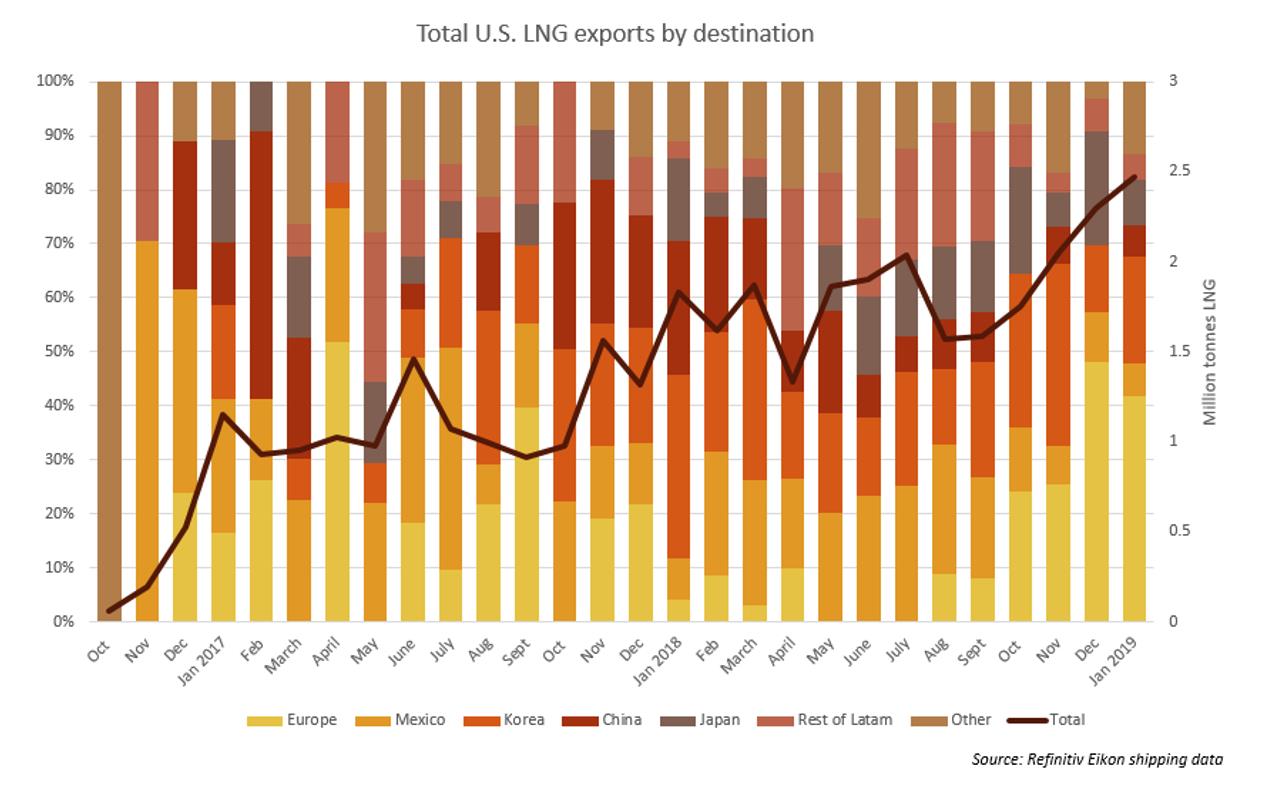 Energy companies have switched sales to Europe after prices in Asia fell sharply on lower-than-expected demand, Reuters reports. Prices in Europe, traditionally seen as a market of last resort, have held firm.

“It’s all about commercial reasons,” said James Henderson, director of the natural gas research program at the Oxford Institute for Energy Studies. “U.S. LNG will go where there is the biggest margin. There is no political motive here.”

U.S. LNG shipments to Europe totaled 3.23 million tonnes, or 48 cargoes, in October to January, compared to 0.7 million tonnes, or nine cargoes, a year ago. The United States is currently second only to Qatar, the world’s largest LNG producer, as an LNG supplier to Europe, Refinitiv Eikon data showed. The figures have not previously been reported. 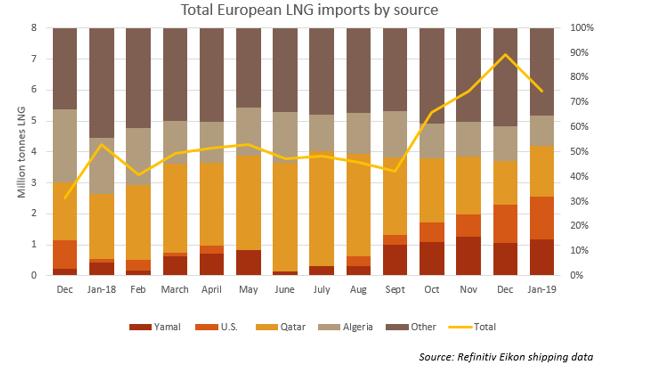 Traders had expected Chinese demand to soar again this winter but Beijing had bought cargoes well in advance and so far, a mild winter has kept stocks high. A 10 percent tariff imposed by Beijing on U.S. LNG imports during a trade war also hurt.

Awash in supply, sellers of U.S. LNG have pivoted to Europe, where pipeline gas from Russia dominates.

Gazprom pumps 190 billion cubic meters, or the equivalent of 145 million tonnes a year (mtpa) to Europe, four times the current capacity of all U.S. LNG export terminals. A new pipeline, Nord Stream 2, will allow Russia to export even more gas to Germany, the largest consumer, although Washington is trying to halt work on the project.

LNG offers countries an alternative to piped gas and forces Russia to compete on price.

In response, Russia has joined the European LNG market through the Arctic Yamal production plant led by Novatek and is poised to become the world’s fifth largest LNG producer in 2019, according to the consultancy Wood Mackenzie.

Since December, however, U.S. LNG has outgunned supply from Yamal into Europe, the Refinitiv Eikon data showed.

Technological developments have enabled the United States to unlock cheap, abundant shale gas supplies and, after starting from scratch in 2016, it is expected to have enough capacity by the end of this year to make it the world’s third largest LNG exporter behind Australia and Qatar.

Cheniere Energy, the top operator of U.S. terminals, added a fifth production line, or train, to its Louisiana Sabine Pass terminal in November, increasing capacity to 26 mtpa and commissioned a new 5.0 mtpa facility in Texas.

Dominion Energy’s 5.8 mtpa Cove Point plant opened last March. Up to 14 new facilities are expected to start up this year at three new terminals and one existing one.

Last year, Trump used trade negotiations to pressure the European Union to buy more U.S. gas. But with the exception of Poland and Lithuania, which have linked their purchases of LNG explicitly to national security, market forces are the biggest factor in sales.

In December and January, the Dutch gas price, which is used as a benchmark for LNG delivered to continental Europe, had been at the highest level since the winter of 2013-2014 at around $7.7 per million British thermal units (MmBtu), compared to previous winter seasons. Rising coal and carbon prices as well as expectations of cold weather have driven them up.

In contrast, Asian spot prices for LNG dropped in December and January to their lowest level since the winter of 2015-16, averaging $8.8 MmBtu as the anticipated surge in demand failed to materialize. That cut the premium on sales to Asia over Europe to just above $1 MmBtu from close to $4 MmBtu last winter, insufficient to cover shipping costs. 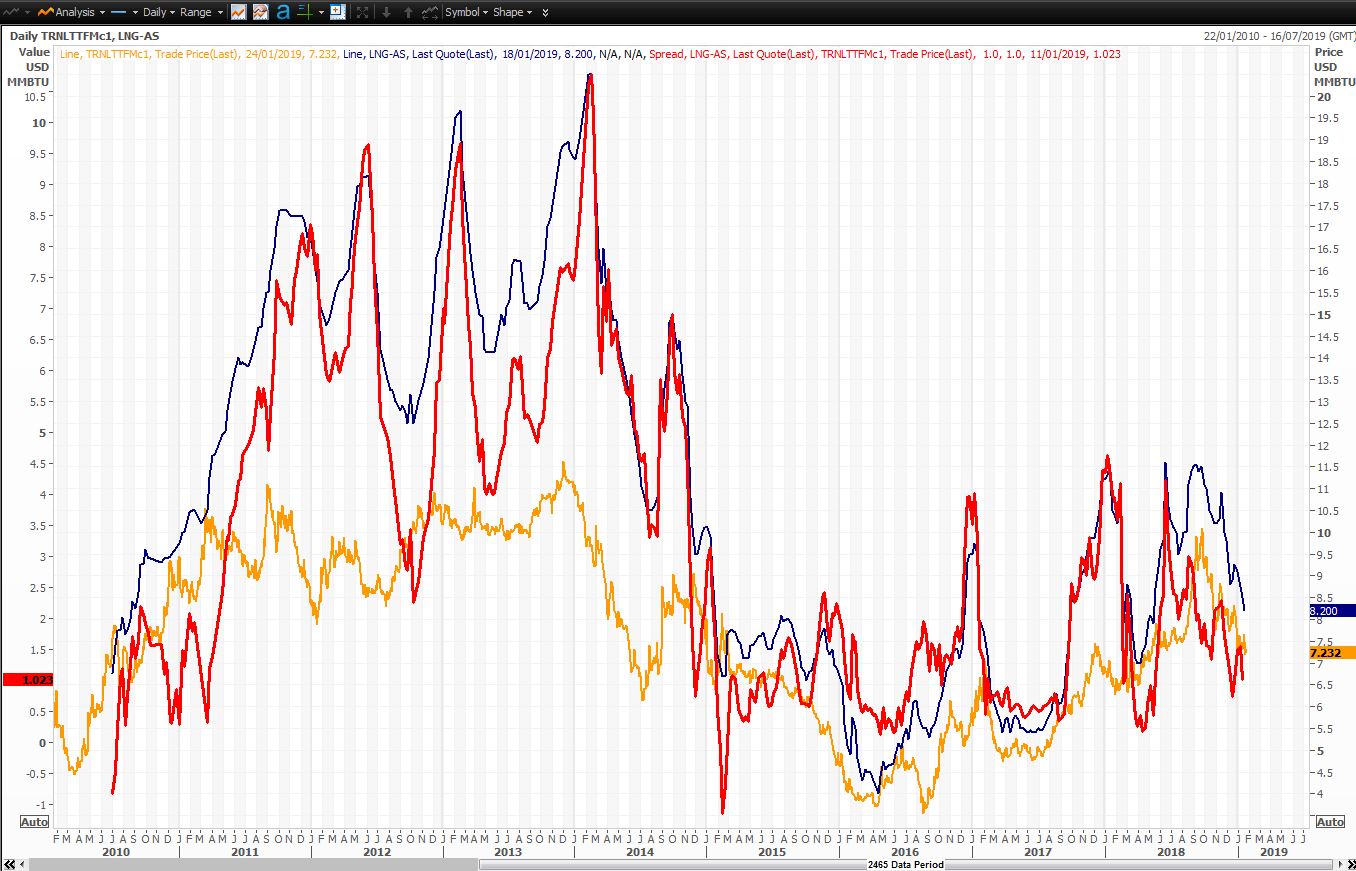 Europe may not remain the top market for U.S. LNG, particularly if gas consumption in Asia spikes over the summer due to demand for air conditioning.

In addition to Russia, Europe is also well supplied with gas from Norway, the Netherlands and Algeria and its use of coal, nuclear and wind to generate power means its demand for gas, used in some types of power stations, can be extremely flexible.

Still, many European utilities have long-term agreements with U.S. producers Cheniere, Dominion and Sempra Energy whose Cameron LNG plant is due to start this year.

Britain’s Centrica will start taking LNG from Cheniere’s Sabine Pass in September and the company confirmed to Reuters that it had been buying U.S. cargos this winter.

Spain’s Naturgy, Iberdrola and Endesa also have contracts with Cheniere starting this year.

“Much of the American LNG is looking for alternative markets aside from the Asian continent and, thanks to lower transport costs, Europe is the market that has benefited most,” said Jose Simón, senior vice president of Global Gas at Iberdrola.

A spokesman for Endesa said U.S. gas had become more competitive. Naturgy, an early buyer from Cheniere, confirmed it has been selling U.S. cargoes into Europe this winter. France’s Total and EDF and Italy’s ENI have U.S. contracts too.

“Because of the amount of available capacity into Europe and the fact that it’s a price-sensitive, demand-elastic kind of market, if you can’t find a better market … into China, Korea, the assumption is you can always push it into Europe,” said Jason Freer, Global Head of Business Intelligence at Poten & Partners, an energy and shipping consultancy.

The Lukoil Varanday tariff war with Rosneft over Arctic oil transport from the Varandy loading terminal is headed to Russia's supreme court. The conflict began...

Industry solutions at TOGC 2020 will be on display at an alongside exhibition. The closed-door Transportation Oil and Gas Congress 2020 (TOGC 2020) will be...

OGE is your best energy news source. We provide you with the latest news and videos straight from the industry.
Contact us: sales@eurasiapress.com